Holland Van Gores was born in Southern California in 1953. As a child he enjoyed boats and the ocean.

He began working with wood, building skate boards, model airplanes, and anything he could in his father’s shop. His artist mother taught him the beauty of nature and the limitless diversity of shapes, textures, and colors, as well as the wonder they emanate.

After high school Van Gores traveled to and explored Mexico, Panama, San Blas Islands, Grand Cayman, and Costa Rica. The jungles of Costa Rica fascinated him enough to prolong his stay of seven months. Those travels inspired him to leave California in 1979, buy a sailboat and begin the adventure of sailing through out the Caribbean. With his tools onboard he combined his love of the sea and woodworking.

He married his “Island Girl” who came to the Caribbean from Michigan. They set sail for South America exploring dozens of Islands and the many diverse cultures through out the chain. After the adventure of a lifetime Van Gores and his wife Mickie moved to dry land, were blessed with twin girls, and built a tropical home in a rain forest high on a mountain slope. He continued his construction business while balancing fatherhood and woodturning. Most of his work is done using fallen or discarded trees as he saw firsthand the devastation clear cutting did to the area where he had lived in Costa Rica.

2013 has brought a major change to the Van Gores family as they have moved from the island of St. Thomas to the Brevard area and now call it home. Van Gores will continue his woodworking while looking for other opportunities to add to his many experiences. 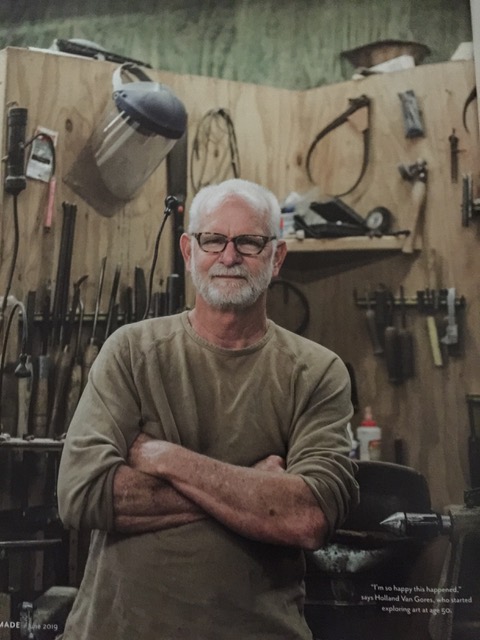